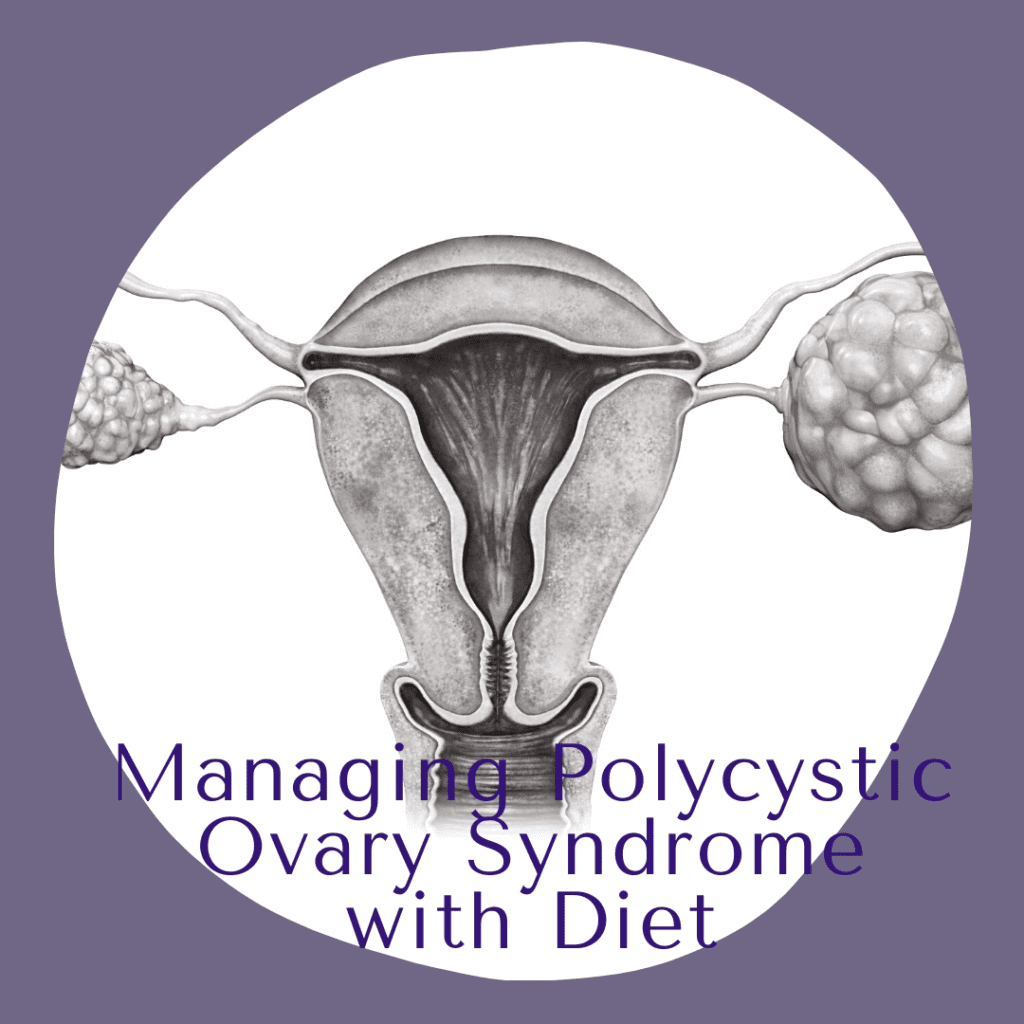 Did you know that one of the main treatments for polycystic ovary syndrome is dietary changes? This is because research has shown there is a strong link between diet and symptoms associated with PCOS. Specifically, certain foods can make symptoms worse, while others can help to alleviate symptoms. To understand why this is, we first need to take a closer look at PCOS.

Polycystic ovary syndrome is a condition that affects women’s hormone levels causing cysts in the ovaries, high levels of male hormones (androgens), and irregular or skipped periods. Since PCOS affects the ovaries and ovulation, it can also make it harder to get pregnant. The most common symptoms of PCOS include: irregular periods followed by periods of heavy bleeding, hair growth on the body and face, acne, weight gain, and thinning of the hair on the scalp.

Insulin is a hormone produced by the pancreas and used by the body to convert sugar into energy. However, when one is insulin resistant, the body is unable to effectively convert sugar, meaning that it remains in the blood, causing high blood sugar.  When the body senses high blood sugar, it produces more insulin as a way of trying to regain balance. The high amount of insulin then causes the ovaries to produce more androgen, which can exacerbate the symptoms of PCOS.

In addition to causing the ovaries to produce more androgen, high insulin levels can also cause metabolic syndrome, which is characterized by elevated cholesterol, blood sugar, and blood pressure. Oftentimes, metabolic syndrome can be a precursor to other medical conditions such as type II diabetes, stroke, and heart disease. This risk is further increased by obesity, which can be another potential complication of weight gain associated with PCOS.

Since PCOS and insulin resistance are so closely related, treatment generally consists of dietary changes that are beneficial for both conditions. At a glance, this means avoiding or minimizing refined carbohydrates such as starches and sugars. Additionally, it also means adding specific foods to your diet such as:

Dietary fiber is beneficial for managing insulin resistance and PCOS symptoms because it slows down digestion. Slowing digestion helps to reduce the effects of sugar on the blood. Examples of high-fiber foods to add to your diet include:

Protein should make up another important part of your diet, however some protein sources are healthier than others. It is recommended to consume lean proteins that are lower in calories and fat than other proteins. These include:

Our body experiences inflammation from time to time, as it is an important part of defending itself against infections. However, chronic inflammation can cause a variety of health problems. By eating  antiinflammatory foods, you can help reduce inflammation and improve your overall health. These foods include: