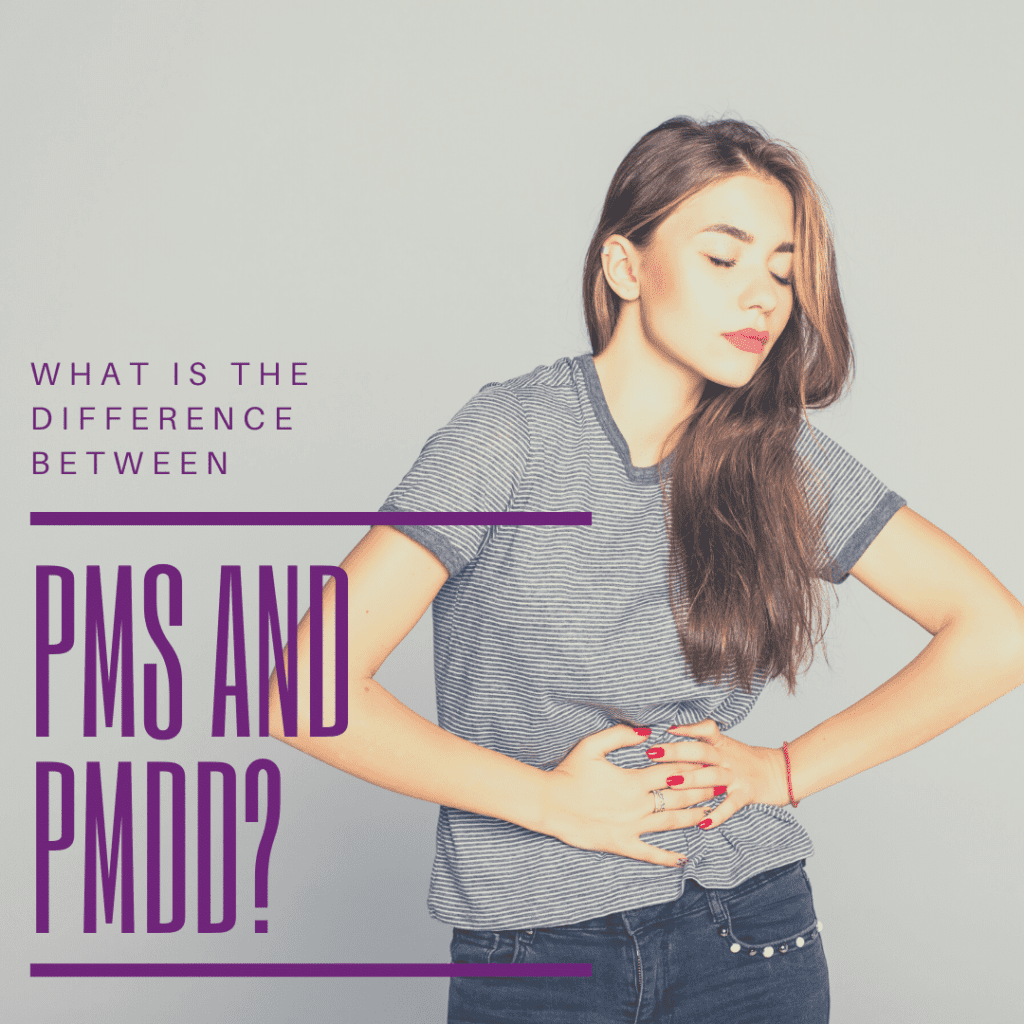 The week before you start your period, you may experience bloating, tender breasts, fatigue, depression, or even irritability. In fact it is estimated that around 75% of women experience these symptoms the week before they start their period. When these symptoms consistently arise every month the week before your period, it is known as premenstrual syndrome or PMS. However, about 3-8% of women experience more severe symptoms a week before their period. This is known as premenstrual dysphoric disorder (PMDD) and it can actually affect your daily routine. So, how do you know if you are affected by PMS or by PMDD? To answer that, let’s take a closer look at PMS and PMDD, as well as how they differ from one another.

Premenstrual syndrome (PMS) generally starts about 7-10 days before your period and continues through the first few days of your period. The exact cause of PMS is not yet known, but research indicates that it can be related to changes in sex hormones and serotonin levels that occur at the beginning of the menstrual cycle. Specifically, estrogen and progesterone levels increase, which can cause mood swings, irritability, and anxiety. Additionally, it has been found that progesterone levels can affect serotonin levels. Serotonin is a chemical found in the brain and gut that affects your moods, thoughts, and emotions.

PMS produces both physical psychological symptoms, such as:

Specifically, PMDD can cause extreme sadness or hopelessness to the point of suicidal thoughts, anxiety or tension, mood swings that can lead to picking fights or crying for no reason, or irritability that quickly escalates into anger. These psychological symptoms are generally so severe that they can cause problems in interpersonal functioning, and can have a noticeable effect on one’s social and occupational life. In some cases, symptoms may even make you feel detached from your life or cause you to lose interest in friends, family, hobbies, or even your job.

How will my gynecologist diagnose and treat PMS or PMDD?

Unfortunately, there are no formal tests that can diagnose one from the other. In most cases, your gynecologist will ask you about your symptoms. They may even ask you to keep a journal or track your symptoms over the course of a few months to determine if there is a relationship between your cycle and symptoms.

For women with PMS, lifestyle changes like exercise, more sleep, healthy diet, and reducing stress can usually help to alleviate symptoms. For women with PMDD, these same lifestyle changes can be helpful, but your doctor may also recommend medications to help you manage your symptoms. Both SSRI antidepressants and birth control pills can be used to manage symptoms of PMDD.